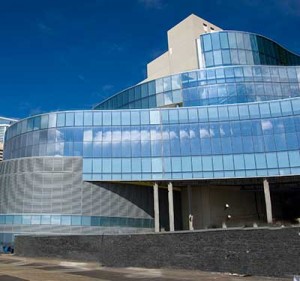 Mr. Straub paid “only” $82 million for Revel Casino,  a  mere  fraction   of the  original  cost  of $2.4 billion.  Not  exactly  pocket  change,  but the news is exciting for Atlantic City.  The casino was open  for  only  2 years  before  closing down.

Revel Casino  was supposed to be a big hit….

leading to its opening, but  this led to  dismay at its demise due to  many factors.

However  this  sale of Revel  could be the  jolt

in the  arm that Atlantic City needs.  Hey, there is  no place like AC  with beaches, boardwalk and casinos.  Give her  some time  and she will be back. This is just the beginning. We have  already spoken about the other  exciting news  with Borgata, Trop and Gardeners Basin revamping. However this was the big one  we were  waiting for.
Yeah  we know that  a lot of us are pissed off at the city  with lots of complaints. But  every time  we go  here just walking on the boardwalk, breathing in the  ocean air makes us feel  hopeful.

Atlantic City- the one and only

Folks  there is no place  like Atlantic City on the east coast that offers all this. It will  continue to make  great strides. I remember South Beach Florida, when they could not give away anything. Now you can not touch any property there,  except guys like Glen Straub.

Folks AC is on the way back!  Stay  tuned for  more updates and great deals this week.