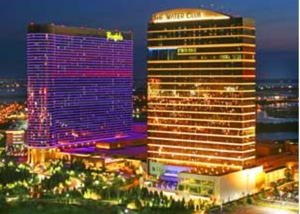 While it might only be the second full month of online gambling in Atlantic City, the physical casinos are already seeing a drop in wins and revenue. However, all is not as bad as it sounds for the eleven remaining gaming venues in town.

With the new gaming laws in effect, Atlantic City casinos have started to enter into the online realm and offer their services to a larger demographic. While the land based casino winnings are down over $195 million from the same period last year, the internet revenue is already starting to draw in big bucks for the casino owners. Without this new option, casinos would have seen a drop of almost 10% in revenue for January, rather than the 4.6% which actually was recorded.

In December, the first official month of legalized online gambling, casinos were able to draw in an estimated $7.4 million. By January’s close, the number had risen 28% to just under $10 million.

The drop in physical casino earnings wasn’t helped with the closing of Atlantic Club Casino Hotel in early January. An announcement is still to be made as to the future of this location.

Coming out on top of the online gambling operations is Borgata, drawing in $3.9 million of the revenue.